I was born in the Westphalia region of Germany, where I grew up and studied visual communication and graphic design, specializing in illustration.
After graduating, I moved to London and started my career as a freelance illustrator. Three years later, in 2000, I relocated to Australia, first basing myself in Sydney, and now in the Blue Mountains West of Sydney.

I work mainly as an illustrator for magazines and book publishers, and occasionally for corporate clients. Here are some of the people I’ve had the pleasure to work with: 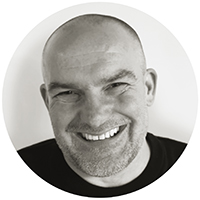